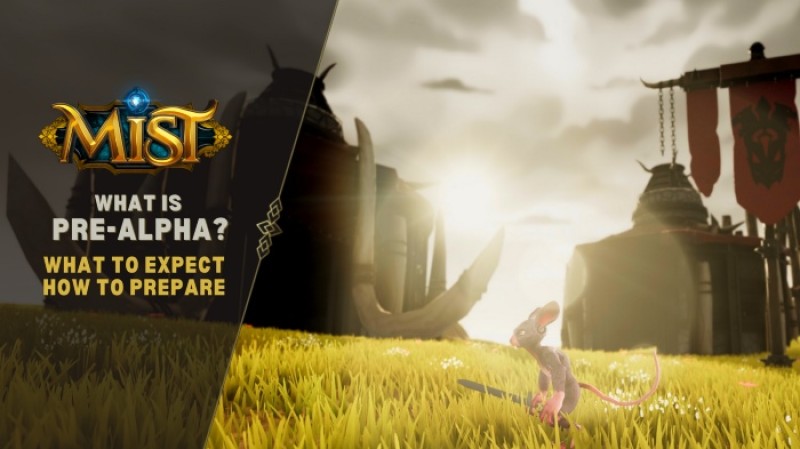 We truly recommend reading this article in-depth. During Pre-Alpha the development team has specific goals to accomplish. We want to set positive and productive expectations for pre-alpha. We will be delivering a fun experience for players. However we want everyone to remember that pre-alpha is a testing phase of many elements of the game.

Many features will be available, and many more will come as we finish our tests on core elements and add the advanced elements for testing.

Together with our players, we can make the Pre-Alpha tests fun, exciting, and productive for everyone. We are happy to have everyone on as Pre-Alpha Testers.

During pre-alpha, players will act as test users for the most core essential, systems in Mist. Players will help us conduct tests on these systems, to make sure we can optimize these core elements and attach the other elements on a strong base.

We will include many systems pre-alpha version of the game, but not everything. The development team will focus on a very important handful of these features.

Please know, our team is excited to showcase every single system we have built. There are hundreds of them and we are dying to show it all off. However our past experience has taught us 2 things: (1) proper testing starts with the core elements, and (2) if the core is not tested properly you risk many bugs that give a bad player experience.

To ensure the best testing methodology and player experience, we will release updates to the pre-alpha when we finish one stage of testing and move to the next. We will strive to provide a fun, immersive pre-alpha experience why being efficient with our testing as we near the next stage of launch.

Pre alpha WILL INCLUDE:

This can be compared to building a house: the foundation must be tested, measured, and strong before you add the other parts of the house. The pre-alpha release will include the whole “foundation”, along with a few extra systems to make the game fun and enjoyable. As we finish tests, we will include more parts of “the house”.

As a game development example, can you imagine making competitive PVP without optimizing spells and abilities first? That would be no fun for anyone. These are the sorts of problems that are avoided by proper game testing.

Important to note: pre-alpha will be dynamic. This means as soon as we finish testing one system, we may add another system in-game to test. These updates will be done in the form of patches. Pre-alpha on day 1 will not be the same as pre-alpha in week 3, because new systems will be added and tested.

A general summary (but not FULL summary) of systems we will test starting day 1 include:

As the tests finish on each of these areas, we may and will import new systems to test in the form of patch updates to the game client.

Pre alpha WILL NOT INCLUDE:

every single in-game feature at the start. As we want to make very clear, the players are acting as pre-alpha testers. This means that they will be helping us test, optimize, and re-design systems that need it. This is the main focus of the pre-alpha release.

For example: parts of the environment may be made more (or less) graphically intense to test how well the framerate reacts on players’ computers. Some things are purposely inserted into the game, while others may be purposely left out, until it is time to test them.

As another example, we may use specific models and assets that have extremely high (or extremely low) polygon counts, very high shine, and more to test the performance.

Things that will NOT be optimized or available in the release for testing on day 1 of pre-alpha (but will be added as we reach the testing phases) include:

The Mist World and Item Models

The world players will be entering will be large. Very large, actually. In phase 1 of the pre-alpha we are measuring terrain loading performance. This includes land, trees, water, etc. This does not necessarily include performance testing of buildings or towns. As is the proper testing methodology, environment is priority #1.

Once that is optimized, with a single click we will patch in the larger cities and towns. As a result many of the towns in-game will be limited in some areas, and made more detailed in other areas. This is an important part of testing. This is quite a sad feeling for our development and 3d modeler team as we have removed some of their beautiful towns in-game (or put less intensive placeholders) while we optimize the game performance.

Item models such as armor, weapons, and even the character models themselves will be specially tweaked for performance testing too. For example we will add certain armor models or assets because we are testing a multitude of things. That means we may use a specific armor model for no reason other than to test how the reflective surfaces affect the game’s performance. Another example of required testing is how the armors and weapons react to certain animations, game lighting, and more.

So in short, the models you see of weapons, armor, and even our characters, may be purposely upgraded or downgraded for our testing. What you see will often be purposely put in place for testing purposes, and may possibly not even be in the final game release.

Pre Alpha Will be on TestNet: How to Connect

Mist’s Pre Alpha launch will be on BSC TestNet. It will not be on BSC MainNet. So we will need players to switch to BSC TestNet and get some Test BNB before playing. This will allow them to do transactions in=game.

There are simple steps you should take to prepare for the launch. It takes just a second.

Here’s how you do it:

Click save. At the top of your MetaMask you will be able to select your network. You can now select “BSC Testnet”. Congratulations, you have officially switched to BSC TestNet.

2. After you have connected to TestNet, go to the official Binance Smart Chain faucet which gives free TestNet BNBs. Obtain at least 1 TestNet BNB:

Simply go to the official Binance Smart Chain faucet website, paste your wallet address (ONLY your wallet address, not private key), press “Give me BNB”, and press “1 BNB”. You can check your balance now, you have obtained a TestNet BNB which will be used in-game.