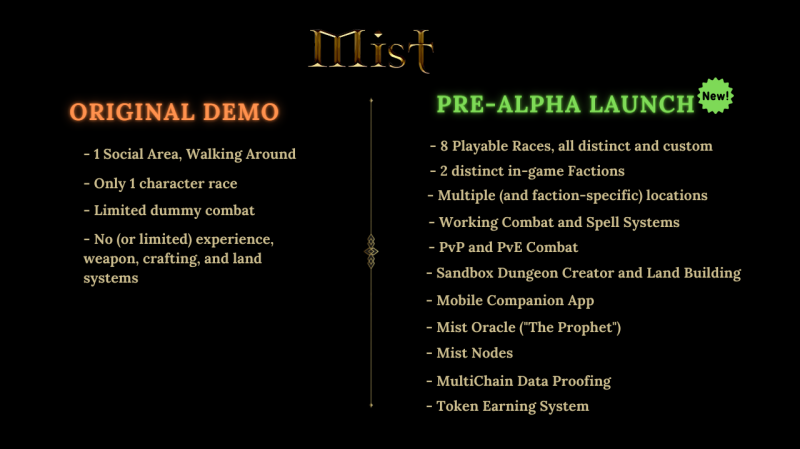 All of the new, bigger systems that we were saving for the Beta will be added to this pre-alpha release. So in summary, instead of a limited “social” demo, we will be bringing a much better player experience in the pre-alpha version. While this release will come at an elongated timeline, we are excited to share the new features in updates and dev logs

Starting the new year, we would like to make a few updates on what is happening with the development process. As we all know, Mist has started as an Action RPG with a top down camera. The style many of us loved so much, including myself. However, our team eventually made the decision to do a complete makeover of our game. This wasn’t only a stylistic decision.
This was a decision to make Mist MUCH bigger. We have already addressed these details in our previous medium articles.

Beginning 2022 here we were, with a bigger gameplan, with more work to do and more importantly having a bigger impact on the blockchain gaming industry in the future. Without further ado let’s talk about the updates on our closed demo.

Initially we were going to release a limited, social hub type of closed demo with very minimal functionality. This game was going to include basic walking around interacting with each other with limited abilities shown. 1 character race, limited combat, no factions, and overall a very limited example of what Mist is. This was for us to be able to test out certain parameters in the game and host our community. However, having our ambitious goals we realize that this will not be enough for our community and more importantly for ourselves. Given the expectations on Mist, we need to deliver something larger than we originally planned, and we want to give the best to our players. There were also negatives on a development side by releasing such a limited demo: for example we realized that we would need to add more of our game systems in the demo so we can do a full test and assessment of these systems.

Due to these reasons we are now updating our roadmap.

Instead of releasing a limited closed demo with a small amount of features, we are now releasing a Pre-Alpha version of our game instead of just a demo. This version will allow players to fully interact with many systems of our game, and will bring with it many more features, zones, and systems. It will be larger in scale and will have many more working parts and systems.

The release of the pre alpha is planned to be on 09/05/2022. This pre-alpha release is larger in scope and will include many more systems, parts, and pieces (see below for the details).

We understand the desire to have a playable “demo” as soon as possible. However we think that increasing our scope and putting in these extra systems will do two things:
1- We will give the players a better feel, a more comprehensive game, and a better experience. To stay ahead of the “games” being released all the time, we need to put out quality gameplay for this pre-alpha release. The original demo plans just would not be good enough in today’s market. So we have decided to add more and expand the scope to deliver a quality release.

2- We will need to test these many systems regardless, so we will conduct these tests during the Pre-Alpha launch. Things that we will include (such as factions, multiple races with special abilities, land, crafting systems, and more) will need to be tested, and it is a good idea to do these tests soon. The original “social” demo would just not be enough.

What Systems and Features Will be added to Pre-Alpha Launch?

Pre-alpha is much more comprehensive. Let’s look in detail of what the pre-alpha vs the closed Demo:

As the next few weeks unfold, we will be releasing more in-game materials for our community to get informed on. These will be in the form of videos. We know that a lot of you are very eager to see certain aspects of the game. However, you should also pay attention to the fact that many things were added to the game such as 8 new races as well as many other functionalities. These all work together and if one doesn’t work the rest gets affected. Nevertheless, we will be releasing more in game content in the upcoming weeks.

What was in the Closed Demo?

We had a small social interaction area where players were basically limited to walk around and chat with each other.

We were only going to allow 1 character race (Human)

We had a very limited dummy combat.

What is different in Pre-Alpha Launch?

Who are we letting into the pre-alpha?

Without going into too much detail there are certain people that are guaranteed to get into the pre-alpha.

The way the pre-alpha works is quite similar to the closed demo, with the demo selection winners participating in the pre-alpha release as well.

Wish all of you a wonderful year!