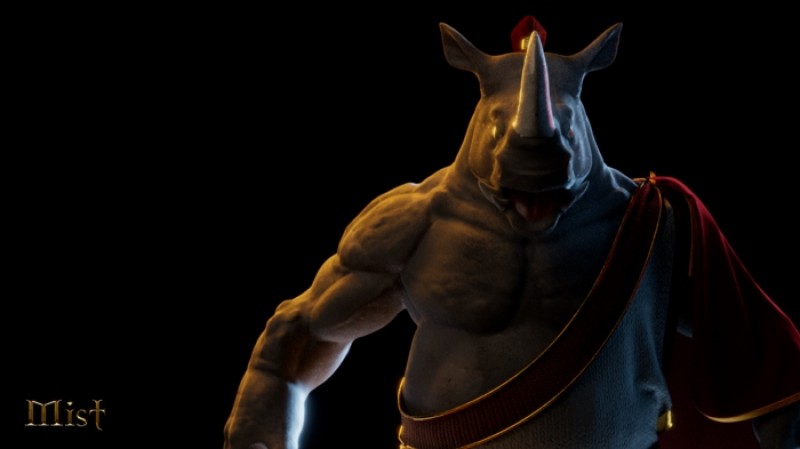 This week we will highlight The Rhinokin.

Rhinos are the inhabitants of Southern part of the Ona Kavu island, they are a playable race that has many unique characteristics. They are known for their way of life which values personal freedom and space. One thing that is hard to miss about them is their incredible size. Standing at 7'5'’ tall (226cm) Rhinos are the largest playable character in the Mist Universe.

They are usually not very aggressive species however, once they get mad, you do not want to be in the way of some raging Rhinofolk.

They have increased defense gained from the items. They also have a special racial ability that gives them a chance to charge and stun an enemy.
These are only 2 of the many special abilities that they have.

Rhinos are a special race because they are very distinct in the battleground. In a battle situation the first thing you might notice from a far away is the silhouette of the mighty Rhino!

While we had to consider the size of the Rhino, we also wanted to capture the free spirit and the intelligence of the character. The challenge with making large characters is that sometimes they might look too “dull”. We certainly did not want Rhino to have this kind of impression.

Many different models were tried and eventually we have settled with one.

You can see the first primary design of the rhino, low poly model is being created. For now there are no skin details etc.

Now we increase the vertices,

Then the high poly model is designed. After this process more details are added.

The hoof, the quality of the skin, the details on the hands. Once these details are added the texturing needs to be done.

We add some textures, and we see the Rhino coming to life now.

Getting closer to the game ready model however, as you might notice there are some differences in the lower poly model and higher poly model. Especially the head and neck area.

The Rhino on the left had wider shoulders and a thicker neck, which gives him more of an athletic look. For this we had to go back to lower poly model and do some changes.

Now that we have expanded the shoulders and the neck area to match the higher poly model we can have another look at the game ready models.
Here is a comparison to added details such as hair, skin color changes to make the character more optimized for the game.

Here above, you are seeing one of the traditional garments of the Rhino. This outfit is called an uwalu. It is an unique type of clothing that Rhinos wear during competitive events.

Going back to the high poly model. We have done a few more things to make the character more appealing and true to the design.

Above you are seeing that we added more details, you can see that we are working on the skin textures and fine tuning details to make the character even better on the high poly character. This is all part of the process to be able to bring the best for Mist.

Now that we have more details let’s look at the Rhino one more time.