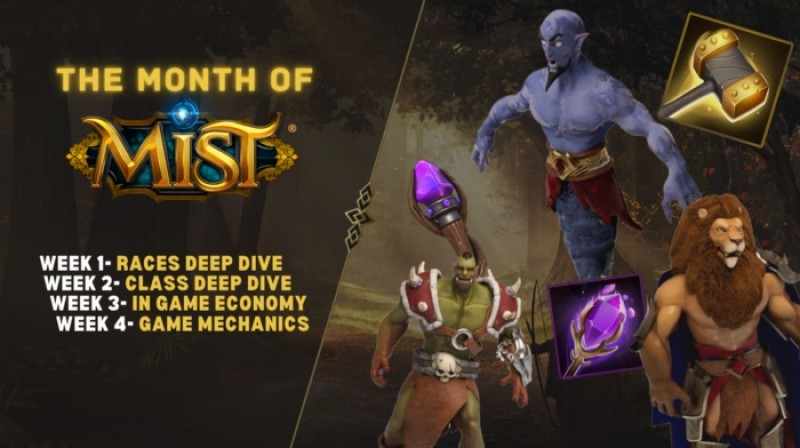 It begins. April is the Month of Mist. For the whole month we will be releasing daily updates to engage with our community and inform them about the upcoming pre-alpha launch.

We will be releasing information ranging from more detailed information about the races, systems within our game, gameplay elements and in-game economy. And more.

Every week of the month of Mist has a slightly different topics that we focus on. It is divided into 4 weeks. With each week we get more relevant information.

The first 2 weeks will be in-depth content about the specifics of the races and classes. This means details about abilities, roles, and all the specifics players will need.

The 2nd half of the month will transition us to deep information about the in-game economy, game systems, and gameplay.

This will be consisting of the deep dive on the the races with their racial abilities and specific gameplay abilities. All the specifics you may have been wondering.

This the deep dive of classes, with specifics about their abilities and gameplay. All of the exact abilities and effects, the roles the classes can play, and more. For example, many have been wondering exactly what spells and abilities their Crusader or Enchanter will have. Well, during the 2nd week this will be revealed in detail.

We will also share info about 3 new classes coming to Mist. Don’t panic, the classes will bring the final abilities and roles needed for an MMO, and will be beneficial to the game balance and original 1st-edition character NFTs. There are some roles that have been missing until today. Any guesses what they could be?

During this week we will begin talk about the in-game economy. Included here is the death system, earning system, scholarship system, guild system, NFT land system, and more.

These topics will uncover information about the in-game economy and how each system works with each other.

This is the game mechanics week, info about logging in, account creation, transactions in-game, combat systems, etc. Also included are things like inventory, gear, stats, professions, and more. Think of this week as a game manual.

Mist’s combat system has had a full overhaul since the original videos months ago. Different playstyle, different action-based combat, and a way more dynamic gameplay experience.

To sum it up, in the first two weeks, we will release “new” information and important details about the players’ characters. Specifics of all abilities for races and classes, and will allow players to start thinking about what race/class combo they will want to play.

Week 3 and 4 will be brand new stuff that will be important for earning, and playing the game. You can think of it like a game guide to help players understand the in-game mechanics.

Although we will mention these details during the month of Mist, all the percentages or numbers for the skills and abilities are subject to change for the balancing of the game.

Balancing a game of this size will be a fun task which will take some time. The pre-alpha launch will help with that. There are millions of combinations of abilities, items, races, classes, buffs, debuffs, and more that can exist in Mist (yes really, millions).

As the pre-alpha progresses we will be constantly assessing balance and will buff (improve) or nerf (weaken) different systems.

IMPORTANT: players should be prepared for (and excited for) many iterations of re-balancing the game during pre-alpha. What you see on day 1 may not be the same on day 2. So if your character class is not so strong, don’t worry. Likewise if your character is overpowered, don’t expect it to last.

One of the main goals of the pre-alpha launch is to receive data from the players and improve the game with the new data.

Also we will be testing specific things during the pre-alpha. Therefore some days we might turn-on or turn-off specific game mechanic to focus on specific part of the game.

We will make pre-alpha fun and enjoyable. But remember: all games go through pre-launch testing phases and Mist is no different. It is an important process.

Pre alpha will be in multiple phases. In each phase we will be testing different systems. Therefore we will release certain systems (and fully test them) before releasing other systems.

So be prepared for certain systems to be added overnight, and be prepared for certain systems to be removed after testing is complete. Likewise certain game zones, buildings, or assets are going to be used as placeholders until we obtain enough data on how to optimize them. The game looks and things within the game are not as important for now as the mechanics and systems. Optimizing those things is the biggest priority.

Game development and testing is a delicate and important process. Therefore players must know that the development team will add and remove systems to aid their testing.

Pre alpha will be a large event, and a fully playable game will be live for players to play and experience. However it is not the full game release yet, and players should remember that.