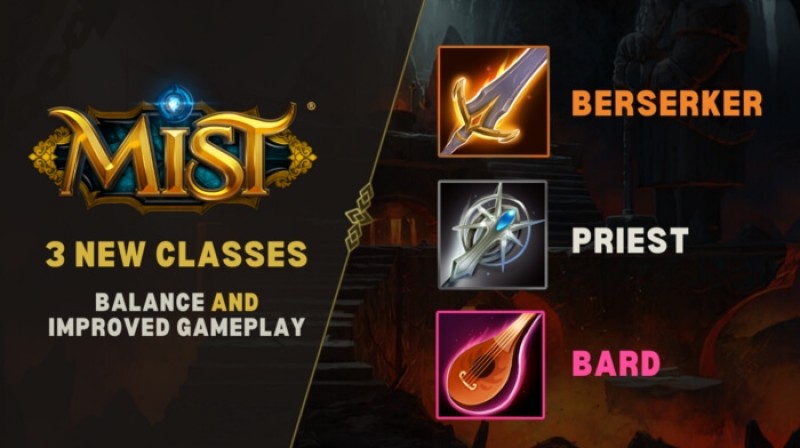 We want to make Mist a fully balanced MMO with dungeons, raids, PVP, and strategic combat. To accomplish this we are adding 2 support classes (Priest and Bard) and a tank/DPS class (Berserker).

Mist has evolved over the past 6 months. It has become much larger, more detailed. We have added 8 custom character races, and we have added 2 factions. These evolutions are necessary to ensure we have a well-defined game world with enough diversity in lore and play styles.

One thing missing from the combat and role system was the support classes. These classes that can heal, buff, and strengthen their allies. They are classes that can keep their teammates alive. Also, the game had only 1 dedicated tank class which was limiting as well.

We are building and adding these 3 new classes into the game to make combat more fulfilling, more dynamic, and to fill all of the required roles in an MMO.

What Were the Problems Before?

During testing our combat system was fun, to say the least. However over countless hours of testing and planning for Mist’s future (thinking 2 years ahead), we realized that support and dedicated tank class would be needed.

Without these support roles, gameplay faces real limitations. For example if you don’t have a healer class, large-scale dungeons and raids become relatively impossible to play properly. PVP Combat becomes a battle of who can do damage the fastest.

Strategy and tactics become too simple and limited if there is no healer or a single dedicated tank class.

PVP combat was feeling too simple. Attack your enemy until someone dies. Not much strategy, not much teamwork, not much collaboration with other players.

As for the tank situation, we felt the need to allow players who want to play tanks to have a decision. They should not be limited to a single main class to play.

We also realized that the two factions were too similar in terms of playstyle. Yes, they had different races, but they could all play every class. That lowered the immersion and lore of the game. We wanted the Clan and the Order to have strong, obvious personalities.

What is New, and What are the Benefits?

Adding two support classes will make the gameplay more dynamic, more strategic. It will also allow Mist to have more strategic PVP as well as allowing Mist to have intense PVE dungeons and raids. Without healers and supports, these things would not be possible.

We want the supports and healers to synergize with the DPS and Tank classes. We want combat to be strategic. We want lifesaving heals, and battle-changing support abilities. We needed that collaboration between roles.

We also added a second Tank/DPS class called the Berserker to balance out the Tank choices for players. The Berserker will offer a different type of play style than the Crusader, but it will fill similar roles. NOTE: The current plan is to allow Crusader to be playable only by the Order, and Berserker to be playable only by the Clan. This will mean high demand for Crusaders in one faction because they will be the only tanks playable.

The faction limitation also gives each faction a distinct personality. The Order will look up to their Crusaders as the honorable, holy tanks that protect their teams. The Clan will have their tank role filled by the bloodthirsty and violent Berserkers.

Demand for these roles will be high, since gameplay will need a tank. So Crusaders don’t worry: the Order will need many of you as each group, each dungeon raid, will need at least one Crusader.

Are These New Classes NFTS?

Yes, these 3 classes will be NFTs. However they will not be part of the 1st-Edition “Highborn” NFTs. They are not meant to compete with the 1st-Editions. They are totally different roles in-game and will be needed to form strong parties, strong groups, and strong guilds. A guild without a healer and without a tank will not succeed! In fact, the new classes will be a benefit and a help to the 1st editions. They will synergize and boost each other.

As with all MMO games, these roles and classes will be absolutely necessary in-game and will offer players the ability to be desired by groups, by parties, and by guilds. Each dungeon will need a tank, support or healer. Each PVP battleground will need supports, healers, and tanks.

As with all MMOs, good tanks and good healers/supports become famous and well-known in game. A good support player may be worth more than his weight in gold. And entire servers may be begging a single tank to help them in a dungeon.

What are Their Abilities and Spells?

Over the next few days we will be sharing the in-depth information of each class. Spells, abilities, gameplay styles, will all be shared.

Each of these classes is important, distinct, and has special spells and abilities. They are designed to be necessary for many in-game situations, and will add strategy, personality, and diversity to the gameplay.